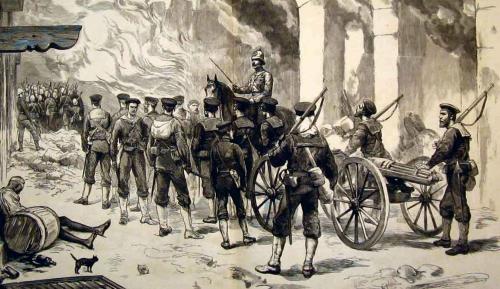 Now in stock are the latest releases from Expeditionary Force of Singapore: three sets devoted to British Naval Brigades of the Zulu War .

In numerous campaigns of their colonial wars of conquest, the British military fielded naval landing forces in support of their regular army units. The addition of temporary “Naval Brigades,” formed by removing Royal Marines and ordinary sailors from the local fleet offshore, bolstered the power of the fighting force and offered, in several instances, the opportunity of fielding artillery units not to be found in the regular army.

Seamen were trained in land operations at the gunnery school at HMS Excellent in Portsmouth, and that effort paid off, as naval landing parties took part in sixteen different campaigns from 1810 through 1900, including the Crimean War, the Indian Mutiny, the Zulu War, the Sudan Campaign, the Boer War and the Boxer Rebellion.

The artillery in these units ranged from elephant-drawn heavy siege guns, as seen in the Indian Mutiny, to the powerful Gatling Gun batteries brought along for the Zulu War and Sudan Campaign.

Expeditionary Force’s three units of naval combat troops include one of the only Gatling Gun batteries ever produced in plastic.

EXPBR06g – Naval Gatling Gun Set
This set includes two magazine-fed Gatling Guns, the predecessor of the modern machine gun. Manned by a well-trained crew, the Gatling was capable of firing 400 rounds per minute. Its effectiveness was shown in the Zulu War at the battle of Ulundi, and in the Sudan at El Teb. The set includes two Gatlings and nine crewmen. A wide selection of spare parts allows for considerable customization of the figures. Assembly required.

EXPBR06h – Naval Landing Party in Straw “Sennett” Caps
This set includes nine sailors in action, wearing the straw caps which helped ward off the heat and glare of the sun. A wide selection of spare parts allows for considerable customization of the figures. Assembly required.

View the trailer for the episode ‘Toy Soldier Story 2’

Posted in Movies and Other Media, The Toy Soldier Company